Apple pomace, a matrix with multiple benefits for piglets in post-weaning? 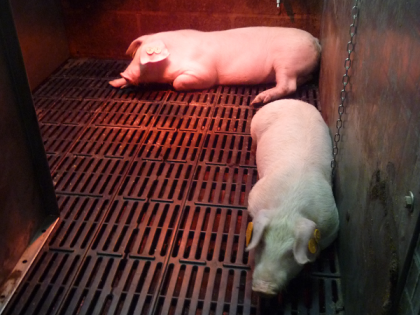 The composition of apple pomace makes it a choice food raw material that ensures a smooth, efficient piglet weaning process, mainly due to its ability to enhance digestive health.

The firts results of a trial on the introduction of apple pomace into the foodstuff of piglets in post-weaning and its effect on digestive health were presented in the CRA-W Info No. 58 (Autumn 2018). This is described as the result of a complex balance between the host (physical and immune barriers), its microbiota (resources used and produced by commensal bacteria and other bacteria that pass through the intestines), and its food (nutrients, additives, anti-nutritional factors ...). It was shown that a diet containing 4% apple pomace had a positive effect on the feeding efficiency of the animals, in spite of an increase in softer to liquid faeces, a problem known as loose stools. The occurrence of these stools required no pharmaceutical treatment under the experimental conditions applied. This observation on the stools is probably related to the effect of the matrix - the fibre profile of apple pomace - rather than a result of pathogens consequences. This leads to two realisations associated with the use of this raw material: loose stools do not necessarily require antibiotic treatment at the start of post-weaning, and hygiene in the boxes must be more closely monitored at the end of post-weaning.

The results of the microbiota test showed that they were enriched through the use of 4% apple pomace, in contrast to a diet containing only 2%. And a more diverse microbiota would have a rather beneficial effect on the health of the individual. Using the 4% apple pomace diet, the profile of the bacterial populations that gradually balance out in the digestive tract was beneficial for the piglet, and would constitute one of the elements that justify the improved performances. To assess the effect of apple pomace on overall digestive health, its effect on the piglet immune system must still be determined. The results are expected soon, but are theoretically favourable according to the literature.

Due to its high fibre and biomolecule content, apple pomace matrix therefore has much appeal and could represent an innovative strategy for weaning piglets. A dose effect has been highlighted. The favourable results obtained using 4% apple pomace, in terms of performance, intestinal morphology and microbiota, encourage the pursuit of further knowledge of the multiple modes of action of this matrix.