Apple pomace, an ally in improving the performance and digestive health of newly weaned piglets? 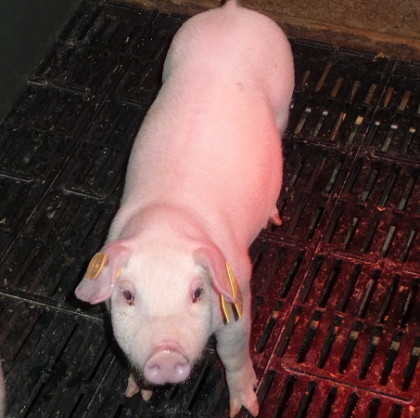 Post-weaning is a critical period because of the consequences it can have on young animals (anorexia, diarrhoea and loss of performance). What if apple pomace could help overcome this hurdle more comfortably? Report on a trial carried out in collaboration with Gembloux Agro-Bio Tech and the Faculty of Veterinary Medicine of the University of Liège.

In March 2018, a group of 42 piglets from the CRA-W farm was enrolled on a 5-week trial at the Centre of Experimentation in Animal Productions (CEPA) of Gembloux Agro-Bio Tech. The aim of the study was to establish whether the addition of apple pomace to the diet of newly weaned piglets had a positive effect on the performance and digestive health of the animals. To do this, two concentrations of apple pomace (2 and 4%) were compared with a control. The performance results were conclusive. Those treated with the 4% apple pomace had an improved consumption index of 1.5 versus 1.7 for those on the control diet. For the 2% apple pomace, the results were more uncertain. The piglets do not seem to derive any benefit from this apple pomace treatment at the start of their post-weaning period. However, they show appreciable compensatory growth in the second part of the post-weaning period, but insufficient, since there is no effect on their consumption index. The beneficial effect of apple pomace on animal performance is nevertheless offset by a higher incidence of diarrhoea. This is exacerbated as the level of apple pomace incorporated into the diet is increased. Other digestive health parameters are currently being analysed to draw more in-depth conclusions on this aspect of the research, particularly in relation to the constitution of the intestinal membrane itself and the microbiota living in the tract.