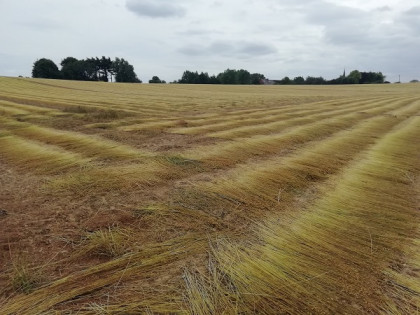 The CRA-W participates to a European project that aims to protect fibre flax from a new fungal disease by means of biological control.

Verticillium wilt is a fungal disease that affects many plants, including potato, beet, strawberry, maple and lime. This disease has recently been reported in fibre flax. The fungal pathogen, Verticillium dahliae, produces resistant spores that can survive for more than 10 years in soil. It infects the roots shortly after sowing, but it is during retting (a process that involves leaving the uprooted flax plants for 2 or 3 weeks on the plot before harvesting, to facilitate separation of the straws from the fibre, see photo) that the fungus degrades the fibre, making it unsuitable for the production of long fibres used in the manufacture of textiles.

There is currently no way to control the disease. The Pathoflax project, an Interreg cross-border project between France and Belgium, aims to help farmers to manage this new disease. It concerns the development of diagnostic methods, the identification of risk factors for disease development (cultivation practices), the characterisation of strains of the fungus, the assessment of biological control products (antagonistic microorganisms and elicitors) and the evaluation of flax varieties for their resistance to the disease. The project carried out at CRA-W aims to determine the extent of the problem in Wallonia, and to participate to the development of detection and quantification methods in soils and seeds. Other objectives include the evaluation of  the aggressiveness of strains of the pathogen isolated from other host plants (notably potatoes) on flax, and the raising of Walloon farmers’ awareness of this new disease.

The first results of the project (which started  in January 2019) indicate that this problem is indeed prevalent in Wallonia. Levels of infection vary considerably from one plot to another. Surveys among farmers are ongoing to determine the relationship between the concentration of fungal spores in the soil and the yield of fibre. Tests designed to detect the fungus in soil and flax seeds have been validated. They will be proposed to farmers via the CRA-W plant clinic.

At the end of the project (2022), a decision support tool will be made available to farmers in France and Belgium, to help them better manage this new phytosantary threat.