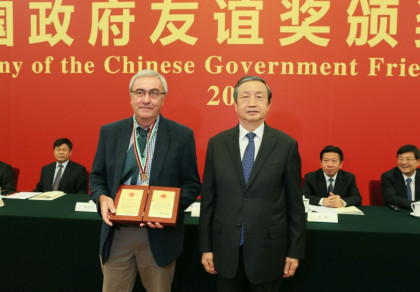 Since 1991, this Friendship Award has been awarded to a selection of international experts every year, to thank them for services rendered to China for its modernisation and the promotion of its economic and scientific activity.

Jean-Louis Rolot's application was submitted to the governmental authorities by his colleagues at the Heilongjiang Academy of Agricultural Sciences who are working for the potato crop development in the Province of Heilongjiang situated in the North East of China.

Jean-Louis Rolot also went to Harbin (Heilongjiang province) to receive the title of Honorary Professor of the Academy from the President of the Academy of Agricultural Sciences.

These rewards are the fruit of 12 years of collaboration and visits to various provinces in China (Chonqing, Anhui, Ninxia, Heilongjiang), all focused on the development of potato cultivation.