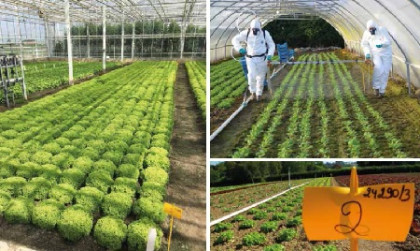 The products that we use to protect food crops against disease, pests and weeds leave residues in both agricultural produce and the environment. This is a key concern for consumers, the authorities and the plant protection product industry. The CRA-W has been working for more than 25 years to quantify pesticide and metabolite residues in a range of different crops.

These studies provide the scientific data that manufacturers need to secure European approval for their plant protection products, and are used to set maximum residue limits (MRLs) for pesticides (which are vital for product application checking, consumer protection and international food trading purposes).

What does residue testing involve?

Residue testing is a two-stage process. The first, so called “agronomic” stage involves performing tests (either in the open air or under shelter), carrying out various processes in line with good agricultural practice, gathering samples according to EU requirements, and sending the samples to the laboratory for testing. These tests are performed throughout Belgium, in both Wallonia and Flanders, to cover a diverse array of soil types, climates and cropping methods, and to quantify residues across a broad, representative sample.

The second, so-called “analytical” phase involves receiving, preparing and storing the samples before they are analysed, as well as developing, optimising and approving the analysis protocol and determining the pesticide residue content in the samples.

The studies are conducted by the CRA-W, either alone or in conjunction with other European partners, in accordance with European (EU) and international (FAO, WHO, Codex Alimentarius) regulations on pesticide residues, and in line with the OECD Principles of Good Laboratory Practice (GLP) (GLP certificate C04).