Pesticides in the atmosphere of Wallonia: a little of everything, everywhere, in small quantities! 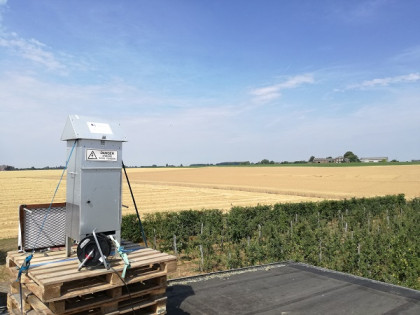 The EXPOPESTEN project aims to assess the average exposure of the Walloon population to pesticides in the atmosphere.

The first part of the study focussed on measuring the concentrations of 46 different pesticides in the air around 12 sampling stations over the course of one year.  The stations were selected to provide a representative sample of the urban and agricultural fabric and a uniform distribution within the Walloon territory.

This study revealed mainly herbicides and fungicides, and the concentrations measured were of the order of one nanogram per m³.

The four farming communities (Gembloux, Louvain-La-Neuve, Dour and Oupeye), and the city of Charleroi, show the highest average total concentrations measured over the year. The fruit-growing community of Oupeye has the highest values for the number of active substances and the total average concentrations. The reference station at Mount Rigi (Waimes), in the heart of the Hautes-Fagnes nature park, has the lowest values for these criteria.

Pesticides were detected throughout the year, but a marked seasonality was observed. Their occurrence is near zero in winter, very high in spring, and more moderate in summer and autumn.  Similar temporal variations have been observed in the heart of the Hautes-Fagnes nature park, but at lower concentrations and for a lower number of pesticides. This is probably due to background concentrations relating to atmospheric transport.

The results highlight a ubiquitous presence of pesticides in the air of Wallonia.  The frequencies at which pesticides are detected are largely linked to agricultural spraying activities, the concentrations being related to the physicochemical properties of pesticides and their uses.

The second part of the study focussed on the impact of living area on the exposure of populations of children to pesticides. A search on biomarkers (pesticides and/or metabolites) in the urine of children was conducted. The results show that of the 31 active substances looked for in the children’s urine, only 6 were found, while specific and non-specific metabolites were detected frequently – some of these were present in 100% of the children.  Due to the plurality of sources of exposure, the results show no conclusive link between the atmospheric concentrations measured and the urinary concentrations.

The EXPOPESTEN results represent preliminary data on pesticide exposure in Wallonia. They point to a need for greater understanding of the overall exposure (via food, water and air) of the general population to pesticides, particularly by studying specific internal exposure markers. The CRA-W is currently participating in a new study, PROPULPP, which aims to assess, among other things, the threat to those living close to fields. These people are much more directly exposed to the drift and volatility of pesticides during spraying.

EXPOPESTEN, which was launched in 2014, has brought together four Walloon partners: ISSEP, initiator and coordinator of the project, the CRA-W, the Toxicology Department of the University Hospital of Liège, and the Phyto Regional Committee (CRP). The CRA-W has mainly been involved in the analytical part and has also contributed its expertise in agronomics and risk assessment.