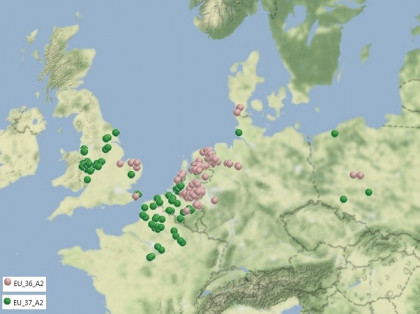 Potato late blight remains by far the main disease of potato cultivation. That’s why research into potato blight at the CRA-W dates back several decades, through the study of the diversity and evolution of populations, characterization of genotypes in terms of virulence and resistance to fungicides, assessment of sensitivity of the main cultivated varieties, improvement of tools to help decision-making, assessment of the effectiveness of control methods in the context of organic farming or in the creation of varieties.

Maintaining a healthy potato crop requires a large and repeated number of fungicide applications, mainly for sensitive varieties. In fact, it is not uncommon to see up to 20 fungicide treatments each year. To do this, farmers have a wide range of products with different modes of action.

Since 2013, the CRA-W has partnered with the Euroblight consortium. This European network of scientific partners and phytopharmaceutical companies each year examines the evolution and distribution of late blight strains across Europe. About 1500 specimens are collected each year in 15 countries and are genotyped. In Wallonia, the situation remained unchanged until 2016 when 3 genotypes represented 70 to 90% of the strains collected. At this time, only the family of phenilamides (active ingredient: Metalaxyl-M) showed signs of ineffectiveness due to the presence of resistant strains of Phytophthora infestans (Blue-13 or 13_A2 strain). In 2017 and 2018, a sudden change was observed and the strains of late blight, the majority 3 years ago, were replaced by two new genotypes: 36_A2 and 37_A2. After they appeared, cases of resistance to fluazinam were observed. Analyses then showed that all 37_A2 genotypes were resistant to this active ingredient.

The sudden appearance of new genotypes and their rapid propagation on European territory reminds us more than ever of the importance of continuing research into potato late blight and more particularly the work of monitoring populations. This is even more true when the appearance of a new genotype is associated with phenomena of resistance to a fungicide. Creating new resistant varieties and optimising tools to help decision-making are levers that make it possible to justify the use of fungicides and therefore reduce the risk of new resistant strains appearing.