Protein-rich fodder is not easy to store, and often causes significant nitrogen losses. Could oak tannin added while ensiling the fodder be an answer to protein degradation? 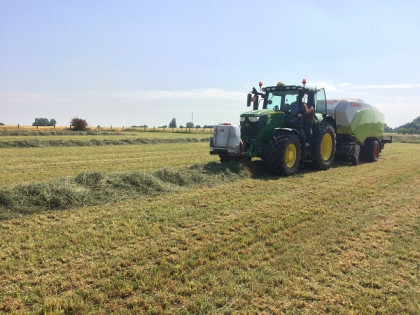 Fodder proteins are highly degradable by micro-organisms, both in the silo and in the rumen of the cow. In the silo, proteins mainly decompose into ammonia. If present in excess, this cannot be used by the animal consuming the fodder. Nitrogen formed from degraded proteins in the rumen is partially excreted as urea, which constitutes another loss of efficiency for the animal.

Can oak tannin improve the efficiency of fodder proteins?

Through experiments in laboratory-scale silos, the Autefel project has shown that oak tannin reduces the ammonia produced during silage fermentation, which means a reduction in protein degradation (from 10 to 15%). Tannins are natural molecules found in plants that have the property of complexing with proteins, thus protecting them from degradation. In vitro studies have shown that tannin can also reduce protein degradability in the rumen (5 to 10%). According to these laboratory experiments, oak tannin seems to be an efficient way of protecting proteins, whether in the silo or the rumen.

To confirm these results, an in vivo trial on 6 dairy cows was conducted this winter. The cows were fed a grass-based silage ration with or without oak tannin, depending on the treatment. Neither the milk production nor the nitrogen efficiency of the cows was affected by the presence of tannin in the silage. On the other hand, we observed variations in the excretions: the cows consuming tannins eliminated less nitrogen via the urine but more nitrogen via the faeces. Although these results do not affect production, they nevertheless have an environmental significance, since urinary nitrogen, being very volatile, is more damaging to the environment than faecal nitrogen.

A further trial, expected to be carried out on cull cows at the Libramont site, will make it possible to compare the addition of tannin before silage with that added directly to rations, and monitor the greenhouse gas emissions associated with livestock manure.

Key to image: Oak tannin, a co-product of the timber industry, is added when baling fodder.

Share this article
On the same subject
#Autefel #Fodder #protein