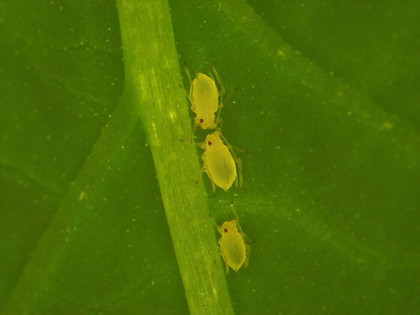 The resistance of Myzus persicae to insecticides is widespread throughout the world. An initial, detailed analysis has been conducted in Wallonia.

Myzus persicae is one of the most pervasive aphids in the world. In Wallonia, it attacks, potatoes, rapeseed, beetroot and many other vegetables. It causes direct damage, and more importantly, transmits various viruses, which has considerable economic implications. These include potato virus Y and beet yellow virus.

This aphid is also known to have developed various mechanisms of resistance to the main insecticide families, including pyrethroids, carbamates, organophosphates and neonicotinoids, which form the vast majority of insecticides used.

Whilst resistance in Wallonia has long been suspected, its extent remains an unknown quantity. A monitoring programme was conducted by CRA-W in 2016 with the support of the Potato Pilot Centre. The DNA of approximately 200 aphids sampled from potatoes across Wallonia was analysed to detect the presence of specific mutations that conferred resistance to pyrethroids on its carrier (mutations L1014F, M918T and M918L, known as kdr and s- kdr), carbamates (MACE) and/or neonicotinoids (R81T).

The results indicate that less than 2% of the aphids tested show no resistance.  A highly significant resistance to pyrethroids is demonstrated, with over 98% of the aphids carrying at least one of the three known mutations, and some aphids carrying several of these mutations at the same time. Carbamate resistance is also observed, with approximately 40% of the samples being positive. On the other hand, no aphids were found to be carriers of the mutation conferring resistance to neonicotinoids.

The frequency of pyrethroid resistance presents a challenge, especially when we consider that 25 of the 35 products used to control virus transmission in potatoes belong to this family, and that these insecticides are marketed as an alternative to neonicotinoids in beetroot to fight against transmission of yellow viruses.

Share this article
On the same subject
#Aphid #Pesticides