Wallonia and the CRA-W, a little closer to the stars ... 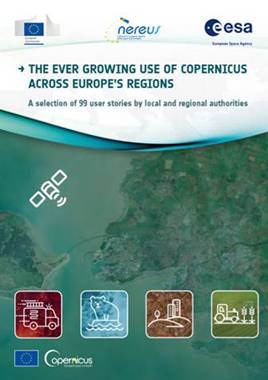 Two CRA-W research projects are in the mainstream of the Copernicus programme: SAGRIWASENT and BELCAM.

Twenty years after its inception, the Copernicus European space programme has become the world's leading provider of earth observation data. This ambitious programme, a symbol of European unity, provides a vast number of images free of charge. It has enormous potential for improving the daily lives of European citizens.

Keen to promote this wonderful but often little-known tool, the Network of European Regions Using Space Technologies (NEREUS), working in collaboration with the European Commission and the European Space Agency (ESA), published a compendium in November 2018 ("The evergrowing use of Copernicus across Europe's Regions"). This contains no fewer than 99 illustrations of the use of this data by public authorities (NEREUS et al., 2018).

With 3 illustrations, Wallonia is certainly positioned as a leading player in this field. And the CRA-W, which is involved in 2 of these illustrations, must not be overlooked!

The first example forms part of the SAGRIWASENT project. The aim is to enhance the use of images from constellations of the SENTINEL satellites of the Copernicus programme in the conversion of the declaration control system set up by the Walloon paying agency (OPW) into a monitoring and support system for farmers.

The second example, based on the same type of data, describes the setting up of a collaborative platform within the framework of the BELCAM project. This is intended as an aid to both farmers and management services in the optimal management of nitrogen supply in field crops.

Discover these fascinating stories (and 97 others) on the website  http://www.cra.wallonie.be/fr/copernicus.

The SAGRIWASENT project is funded by the SPW, convention D31-1368X.

The BELCAM project is funded by the Belgian science policy (BELSPO), convention SR/00/300.