What is the best nitrogen fertilisation management tool? 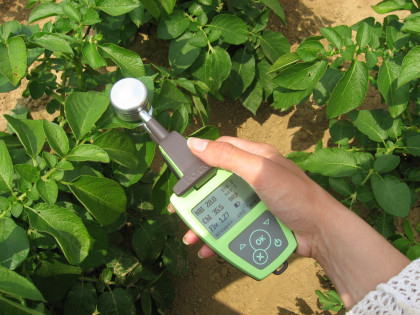 The main objective of the POTFLUO project (2012-2018) was to explore the potential of using chlorophyll fluorescence tools to assess the nitrogen content of potato crops. Its secondary objective was to determine fluorescence indicator thresholds to help farmers in the decisionwhether in season additional nitrogen supply is required.

The potential of chlorophyll fluorescence was assessed over a three-year period for two potato varieties, Bintje and Charlotte, using increasing nitrogen rates. Optical measurements were recorded at different sampling dates using the Dualex and Multiplex fluorimeters, the Cropscan radiometer, and the Hydro-N Tester chlorophyll meter. The comparison of the in-season plant readings shows that the indicators based on the estimation of leaf flavonoids content, measured by fluorescence, and whether or not combined with leaf chlorophyll contentare more promising for evaluating the crop nitrogen status than indicators measured by transmittance and reflectance. In particular, measuring the leaf flavonoids content enables sensitive nitrogen response, an early detection of nitrogen deficiency  and good accuracy of the readings.

A comparison of the irrigation methods (irrigated and non-irrigated) and nitrogen fertilisation methods tested over a two-year period shows that flavonoid content (measured using chlorophyll fluorescence) is not sensitive to water availability, unlike chlorophyll measurements.

By determining the nitrogen nutrition index (based on the nitrogen dilution curve under our conditions) considered as the analytical reference index for the assessment of crop nitrogen status (), we were able to derive the threshold values for chlorophyll fluorescence measurements.

These threshold values are currently under agronomic and environmental validation. One potential application of the project would be to incorporate these values into an easy-to-use decision support system that farmers could use to manage potato crop nitrogen fertilisation.