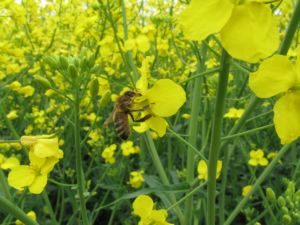 Within the framework of the Maya Plan, a study was conducted by CRA-W and CARI (Centre Apicole de Recherche et d’Information) at Walloon apiaries to investigate two potential factors in the decline of bee colonies: pesticides and viruses.

In this study more than one hundred colonies were monitored before and after the 2011-2012 winter period. Honey, comb and beeswax samples were taken on different occasions in order to analyse the pesticide residues and bee samples were taken for virological analysis. By the end of winter several colonies were showing symptoms of decline (mortality, disappearance, loss of the queen, brood comb problems) that could not be attributed to known factors. These colonies were all placed together in a group named the ‘group in decline’. The viral analyses showed no significant difference between either the load or the number of viruses in that group compared with the unaffected colony group. The residue analyses, meanwhile, indicated that the colonies were contaminated not only by acaricides and insecticides but also by a number of fungicides. In the case of both acaricides and insecticides, no significant difference in residue levels per colony was observed between the two groups, in contrast to the fungicides. The latter were twice as prevalent in the group in decline compared with the unaffected group. Moreover, on assessing the weight of the viruses and the acaricide-insecticide and fungicide residues, the fungicides clearly emerged as the only factor that could account for the declines observed in our study. However, the mechanism behind these effects still remains to be discovered. To supplement these results, a soil use analysis clearly indicated that the likelihood of decline increases with the area under crops around the apiaries, whereas the opposite is the case with grassland. One particular reason for this difference could be that plant protection treatments are carried out more frequently in crops than in meadows. These results raise questions about the adverse effects of fungicides on bee colonies and, more generally, the compatibility of the intensive farming model with preserving pollinators.

Project subsidised by the Department of Agriculture, Natural Resources and the Environment, (SPW/DGO3), agreement no. D32-0075.