Full speed ahead for Walloon potatoes 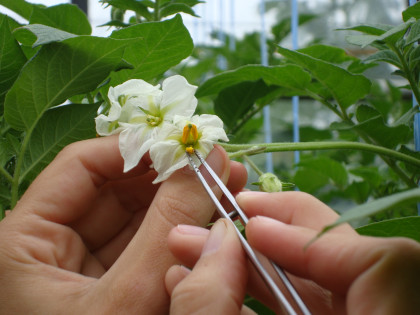 CRA-W’s potato breeding programme forged ahead in 2013 with the start of a research project, an application to register a clone in the Belgian catalogue and the close involvement of private players.

Launched on 1st May 2013, the Moerman-funded research project entitled GEREPHYTI ‘Improving and managing potato resistance to Phytophthora infestans in order to develop ecologically intensive agriculture’ has ramped up the breeding programme initiated by CRA-W in 2005. The aim of the project is to obtain clones/improved varieties bred for sustainable late blight (Phytophthora infestans) resistance. The proposed route to improving variety behaviour involves combining conventional breeding methods with the use of germplasm extended to include wild Solanum species as a source of new resistance genes and applying marker-assisted selection for early detection of resistance genes, along with cisgenesis for gene transfer.

An initial application has also been made for registration of a clone in the national potato variety catalogue. This clone, obtained from a Gasoré x Victoria cross, has the properties required by the processing industry for making potato crisps, namely its round shape and the good colour developed by the potato slices when fried. Other advantages include a good yield, high Y virus resistance and moderate susceptibility to late blight.

At the same time, the private players (seed potato producers, seed potato distributors, traders and industry) have been closely involved in the programme for the last two years. This takes the form, on the one hand, of a half-day in late November each year dedicated to a detailed technical presentation of the clones at the advanced breeding stage: description, agronomic performance, tasting. On the other hand, a call for applications has been drawn up following consultation with users of the future catalogue varieties. The aim is to list enterprises authorised to test one or more clones in specific conditions. It sets out the rights and obligations of the successful tenderer and CRA-W throughout the assessment period.

So we can hope to see potato varieties with the CRA-W mark back in the national catalogue soon!