Lameness as an indicator of dairy herd health 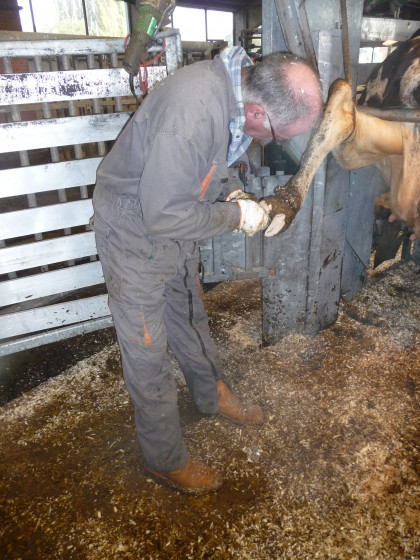 Lameness is a well-known pathology in cattle, but its significance is often underestimated. Nevertheless, it ranks third among reasons for culling dairy cows, after mastitis and reproductive disorders, causing farmers not inconsiderable financial losses.

As an example, an ulcerated sole in a dairy cow can result in an overall loss in the region of EUR 300-600  (Institut de l’Elevage, 2008). That makes it important to take an inventory of the prevalence of this pathology among Wallonia’s dairy farms and to highlight risk factors.

To that end, a preliminary study was conducted in the context of a final dissertation. The study was based, on the one hand, on data collected since 2010 by monitoring the CRA-W herd and, on the other, on a survey of eight farms in the DAIRYMAN network practising different management methods.

The farm survey showed that zero grazing is more favourable to lameness. This was confirmed by monitoring the CRA-W herd, with some of the cows being kept indoors for the purpose. Within that group there were twice as many animals with foot lesions as in the grazing group. These observations were corroborated by the locomotor score, which was poorer in the zero grazing group. Apart from the number of cases occurring, the nature of the infection also appears to be linked to the management method. There is a higher incidence of foot-rot in the zero grazing herd, along with lesions such as abscesses, ulcers, granulation tissue and haematomas. Conversely, Mortellaro’s Disease was found to affect both cows at pasture and zero grazing cows equally.

CRA-W intends to pursue this line of research by increasing the number of farms audited in order to pinpoint the significance of this issue on Wallonia’s dairy farms according to the herd management method. Areas of work are under consideration in collaboration with ULg’s Ruminants and Pigs unit.