Oilseed rape growing with no pollen beetles and no insecticide - utopia or reality? 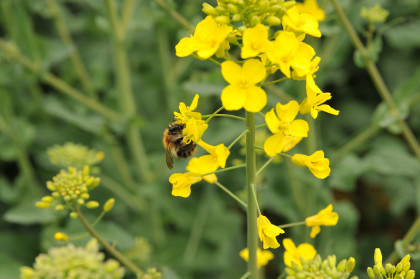 Of all the crops grown in Wallonia, Oilseed rape is one of the biggest insecticide consumers. There may be alternative solutions!

The main reason for this is the risk presented by adult pollen beetles. These little beetles destroy the flower buds to get to their favourite food, pollen. The damage they cause varies considerably from year to year, but can be extensive and a major concern for many farmers. Their response is intensive, repeated insecticide applications. Unfortunately, this has resulted in the emergence of a number of resistant pollen beetle strains, to the extent that out of the dozen or so preparations originally available there are now only three or four insecticides that are still sufficiently effective. Moreover, the insecticides used eliminate natural predators and are therefore also suspected of favouring other pests that occur later in the crop, not forgetting of course that their use in a crop so important to bees raises a few questions.

However, pollen beetles can be controlled naturally by several species of parasitic wasps of the Tersilochinae family. These mini-wasps attack the beetle larvae, thus reducing the following season’s pollen beetle populations. Although these beneficials have been studied in various countries, no data were hitherto available for Belgium. A study carried out by CRA-W in Wallonia in spring 2013 showed that these parasitic wasps occurred in most rape fields and were fully synchronised with their hosts. Unfortunately, there is little hope that they could contribute significantly to damage reduction, as their populations are usually small.

Two main reasons for this shortcoming were identified. The first of these is intensive tillage after the rape harvest in preparation for sowing cereals. This is particularly detrimental to the parasite larvae and pupae, which are forced to spend the autumn and winter in the soil, unlike their pollen beetle counterparts, which generally hatch before ploughing. The second reason is that the parasitic wasps are highly susceptible to the insecticides, which are often more toxic to the parasite than to the pest. This was shown by another 2013 study which found that of the registered insecticides, only one is both selective for the parasitic wasps and effective against the pollen beetles.

In conclusion, there is potential for biological control of the pollen beetle in Wallonia, but it is currently probably too low to allow one or more insecticide treatments to be skipped. New cropping systems that tilt the balance in favour of the beetles’ natural predators, such as minimal tillage after a field rape crop and the use of selective products, ought to be introduced in future to reduce the incidence of pollen beetles and, thus, the crop’s dependence on insecticides.