Should entire male pigs be housed in mixed fattening stalls? 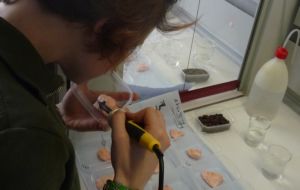 Live surgical castration of piglets is routinely carried out on European farms. It is a means of preventing undesirable boar taint in pork meat. However, the practice is now being questioned because of the pain caused to piglets.

Producing entire males (uncastrated males) is an alternative which is investigated in the AlCaPorc project conducted by CRA-W’s experimental piggery between August 2011 and March 2014. The main objective of the project is to highlight production performances and economic benefits for farmers.

As mixing males and females in the same stall is of common practice, another objective is to investigate animal behavior management, performance levels and carcass and meat quality, including risk of boar taint.

The conducted experiment involves 264 pigs fattened in two successive groups. Each stall contains 8 animals which were either all male, all female, or equally mixed male and female. They are housed on straw and fed ad libitum. Each batch is slaughtered as a group, at a live weight of approximately 115 kg.

In the light of production performance, carcass and meat quality, behaviour and injuries, mixed housing appeared to essentially favour males. It limits the serial disturbance effect and reduces the instances of mounting and, thus, the injury scores that occur in all-male groups. In contrast, females appear to suffer somewhat from cohabiting presenting a higher injury scores. The slaughter of gestating females presents an ethical problem.

With regard to boar taint, mixed housing increased the risk of undesirable odour (measures of androsterone and skatole content by UPLC-MS/MS on fat samples). Carcasses containing these substances at such levels have to be removed from fresh consumption (content greater than 2,000 ppm and 200 ppb, respectively). These represent 12.5% for mixed males and females against 6.5% in males fattened alone. The fattening group effect is significant and the undesirable odour rate generally appears relatively high compared with the average values of 3 to 5% usually quoted. When the human nose method at laboratory was applied with the aid of a trained panel, the boar taint rate rise to 21%; no significant effect of mixing. The specific nature of the answers reveals problems with the method since, on one hand, half of the samples that were positive in chromatography are considered acceptable by the panelists and, conversely, one sample out of five was rejected by the panelists despite being chromatographically negative. These results point up the need for further investigations into analytical methods and animal husbandry practices likely to limit the risk of boar taint.

Project subsidised by the Department of Agriculture, Natural Resources and the Environment, (SPW/DGO3), agreement no. 2998.