Strip-till, half-way between ploughing and no-till 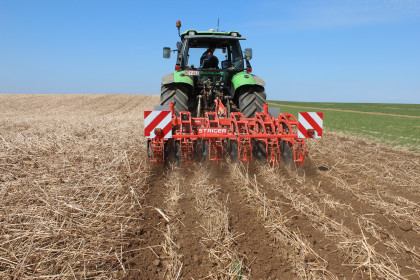 Tilling only where the crop will be sown looks like an attractive compromise for Wallonia’s farmers.

Tillage is the subject of vast amounts of research, with two permanently opposing ‘schools of thought’, namely overturning (ploughing) and reduced tillage practices (ranging from decompacting to no-till).

Reduced tillage practices are considered to be more favourable to soil fertility (physical and biological), but can have drawbacks such as frequent lower yields and increased use of total herbicides (glyphosate) to counter weed pressure.

Also, the diversity of the cropping patterns and the high proportion of row crops in the rotations are two characteristics of Walloon agriculture that curb the expansion of reduced tillage practices here.

Against this background, strip-till, a hybrid between reduced tillage and ploughing, appears to offer the best of both worlds and is likely to be acceptable to Wallonia’s farmers. With this method the soil is tilled in strips, in other words, the soil is loosened only along the line of the seed drill, leaving the interrow intact and covered by crop residues.

The technique was developed in the United States, where farmers faced serious erosion problems, in maize growing in particular. Having tried no-till and found that the resulting soil compaction was often deleterious to crops, one farmer developed this tillage method.

The first European strip-tillers appeared in 2005, but the technique did not really take off in Europe until 2010. In Wallonia, CRA-W has been conducting research since 2000 into the positioning of beet rows in relation to tine passes through decompacted soil (cf. CRA-W Info No. 5 – Winter 2004). CRA-W’s research then naturally extended to strip-till, and exploratory trials with the technique were set up in 2012 and 2013.

The expected benefits of strip-till are reduced tractive effort, fuel savings, lessening of the negative impact of the settling that often occurs with reduced tillage, ease of establishing the crop (good access to the row), water savings, faster soil warming than with reduced tillage, less risk of erosion, wider choice of intercrops (removal of the constraints associated with winter destruction). In addition, there is the possibility of carrying out localised fertilisation and weed control (savings on inputs, and less risk to the environment).