The sustainability of Wallonia’s agricultural sectors: a challenge within the scope of life cycle assessments ? 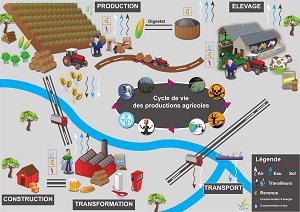 The aim is to make the agricultural and agro-industrial sectors sustainable by reconciling environmental and socioeconomic performance. CRA-W is involved in this by developing life cycle assessments (LCA).

Agricultural sectors must ensure that their activities are sustainable by limiting their environmental impact while producing quality products in sufficient quantity in an economically profitable way. The industry has to strike a balance between meeting the expectations of consumers (e.g. carbon labelling) and society (e.g. river pollution) and satisfying the agricultural sectors’ own needs by optimising the means of production in order to ensure sustainability. LCA is a formal method (ISO or recognised method guidelines) for studying the relationship between agricultural products and sustainability. LCA aims to assess the environmental and socioeconomic impacts related to one or more issues (eutrophication, global warming, socioeconomic repercussions, etc.) linked to a product or service in the different phases of its ‘life’, from raw material production/extraction to disposal or reuse of the waste products.

A well-conducted product LCA throws up ways of alleviating impacts, in particular by identifying the life cycle phases that are the biggest contributors to those impacts, and guides decisions by identifying the most efficient uses for the product (in the case of cereals, for example, as animal feed or for energy). However, the quality of the LCA results depends on the accuracy of the data used, the models applied and specifically, in the case of agricultural products, taking local production conditions into consideration (e.g. yield, weather, working conditions, etc.).

Given CRA-W’s background in agricultural and food production research and the need to meet the challenge of reconciling the agro-industrial sector and sustainability, CRA-W has developed expertise in agricultural product LCA. And we would like to share that expertise with you.

WALLOON CEREALS: A MAJOR CROP WHICH IS DEVELOPING CONTINUOUSLY

Fields sown with cereals make up more than half the arable land in Wallonia. With some of the world’s highest yields, these crops offer the region various options for both food and non-food uses.

Covering about 60% of Wallonia’s arable land, cereals are the subject of various lines of research ranging from production to utilisation. The ALT4CER project, conducted by CRA-W since 2011, has established that 14% of the grain produced in Wallonia is consumed on the farm itself and 17% is exported abroad. On the Belgian market, 45% of the grain goes to the animal feed industry and barely 11% is processed into human food. Whereas the starch industry processes 19% of the grain into various food products (starch, gluten, glucose, etc.) and non-food products (chemicals, cosmetics, etc.), the fastest-growing sector is the biofuel industry, which converted 25% of Wallonia’s grain (including 27% of its wheat) into bioethanol and various co-products for food use in 2010.

LCA studies carried out by CRA-W have shown that, thanks to our very high yield and excellent control of cultural practices, Wallonia’s cereals generally have a smaller environmental impact than the European averages with which they are compared.

Again due to the high level of control and associated yield (8.5 t fresh matter per ha in conventional farming as against 4.5 in organic), from an environmental point of view, organic winter wheat has an equivalent impact or even, in the case of some impact categories, a higher impact than conventional winter wheat. On this point, the BioGeoCarbo project has demonstrated the importance of correct organic fertilisation management in organic production systems. In some impact categories, the emissions from this type of fertilisation contribute significantly to the overall environmental impact (67% to global warming, 93% to soil acidification).

The LCA is therefore an essential tool for assessing the conditions of the transition from conventional agriculture to ecologically intensive agriculture, in that it gives farmers scientific bases to back up the perceived benefits of the reduced tillage practices and lower input levels thus made possible.

Which biomass for which bioenergy uses?

The Inovabiom project, which began in late 2011, is aimed at the technological development of methods for converting lignocellulosic biomass such as wood, straw and forage for energy use. To that end, four processes for converting biomass into energy are being studied: second generation liquid biofuels (bioethanol), solid biofuels in the form of roasted biomass pellets, gaseous biofuels in the form of biogas produced by biomethanisation and, fourthly, combustion as a control. As well as considering innovations at a purely technological level, the project also looks at the environmental performance of different conversion processes in comparison to one another and as a function of the biomass concerned.

As often happens in agricultural product life cycle assessments, the biomass production stage accounts for a significant share of the final environmental impact of the process concerned (35-50%). However, steam pretreatment (steam explosion), preparing the biomass for enzymatic breakdown (hydrolysis, fermentation) also has a not inconsiderable impact (10-17%). For example, comparing the environmental impact of producing 1 kg of second generation bioethanol from three different types of biomass (fescue, maize and sorghum), fescue appears more attractive in terms of environmental performance than maize or sorghum. So far, only the results of steam explosion and hydrolysis have been analysed. The conclusions therefore remain to be confirmed once the fermentation and distillation stages have been included in the overall impact.

When all the results have been processed it will in particular be possible to determine the environmental relevance of any benefits, in terms of the biomass-to-bioethanol conversion yield, resulting from pretreatment. Likewise, the research will then look at identifying the most suitable types of lignocellulosic biomass for processing according to the process considered.

A sustainability analysis of the agricultural and agro-industrial sectors should include both the human dimension and the social and economic dynamics of their development in order to propose models for predicting the impact of choices upon sustainability. The agro-industrial sector is aware of the need to bear this in mind in order to ensure that its products are sustainable.

So, in 2009, UNEP/SETAC published the first S-LCA method guidelines. S-LCA follows the same stages of development as Environmental Life Cycle Assessment (E-LCA) and differs from it by measuring and assessing the impacts on stakeholders, identified as workers, local communities, society, consumers and the operators in the value-added chain. The impact (sub)categories are the working conditions, health and safety, socio-economic repercussions, etc.

The ALT-4-CER project aims to study the sustainability of Wallonia’s cereal sectors according to the different options for use (food, feed, energy, bio-based products), using E-LCA and S-LCA. The impact sub-categories studied are workplace safety, local jobs, added value distribution and working hours. The stakeholders considered are farmers, workers and enterprises. One finding, for example, based on accounting data supplied by the DAEA (Department of Agricultural Economic Analysis) was that the added value created by a farmer did not depend on his educational background. Other results were that a processing worker will have more hours of training that can be recognized by a certificate in the trade sector, and that the number of part-time jobs is greatest in the trade sector (13.5% of the total labour force).

By integrating S-LCA into its sustainability approaches CRA-W can provide an enlightened answer to industry operators by comparing various possible compromises from both an environmental and a socio-economic viewpoint.

Environment and stock farming: a matter of scale and modelling for shared benefits?

Livestock farming often gets a bad press because of its environmental impact. However, the relationship between the environment and stock farming is a complex one and a number of aspects should be considered when analysing it, such as the diversity of systems, the production potential and the socio-economic impacts, at production system level.

Apart from the environmental aspects, topics that come to mind when talking about ruminant farming, whether for milk or meat, include grassland, farmyard manure, concentrates, countryside, fertilisation, and so forth. Beyond these common concepts there is a great diversity of situations and systems, which may or may not be linked to territorial constraints. The projects conducted by CRA-W and funded by Service public de Wallonie (Qualaiter) and in partnership with the private sector (ACOSEC: ACYVIBO), using LCA in livestock farming systems, come within that framework. Having regard to the prevailing diversity, these projects aim at estimating the environmental impacts, including various dimensions (eutrophication, global warming, energy consumption, etc.), of milk and meat production in Wallonia with a view to identifying ways of reducing them, taking into account the impacts resulting from input production (energy, fertilizers, machinery, feed, etc.). First results obtained from surveys of farmers indicate a high degree of variability, and some room for progress has been identified without compromising the production potential. The main area with prospects for progress is making better use of farmyard manure, and that in turn should reduce the use of inputs. These approaches have also revealed genuine interest in and awareness of environmental issues among the farming community. The ultimate aim is certainly not to stigmatise a particular production method but rather to find a way for each production method to reconcile the environment, the countryside and farming which, after all, feeds us all.

Wallonia’s farms have a key role to play as energy suppliers/consumers and greenhouse gas sources/sinks. So how can these flows be accurately taken into account? CRA-W offers a tool called DECiDE.

Energy consumption and climate change are core issues, as is evident from the many initiatives at European, national and regional levels. Farms are currently heavily dependent on fossil fuels, either for direct consumption or for input production, and thus also on fuel costs. At the same time, they are also potential producers (biomass and biogas). The agricultural industry also accounts for 12% of anthropogenic greenhouse gas (GHG) emissions in our region. The sector is concerned as a major contributor of methane and nitrous oxide emissions, but it can also act as a carbon sink by trapping carbon in the soil. However, agricultural systems’ energy consumption and GHG emissions vary considerably and depend very much on the types of farms and agricultural practices. The first step towards putting reduction measures in place therefore requires a sound knowledge of the relationship between practices, energy balances and GHG which, given the specific nature of the practices and the pedoclimatic contexts, requires regional benchmarks to be developed.

To meet that need, CRA-W, in consultation with AWAC, DGO3, DGO4 and organisations in charge of management accounting (AWE, DAEA, SPIGVA, OPA Ciney) has developed a tool called DECiDE (Diagnostic Energie-Climat Des Exploitations agricoles wallonnes), which is subsidised by Wallonia’s Air and Climate Office (AWAC). The tool can be used to produce energy and GHG balances for Wallonia’s agricultural systems. The object is to provide an open, transparent tool which is accessible to all via an Internet platform, aimed at farmers and institutions (research/administration/decision-makers), that can be used for (1) comparing one farm with other farms of the same type to show up differences and the practices that give rise to them; (2) advising on reducing energy consumption and GHG emissions; (3) supplying reliable benchmark values; and (4) quantifying the services rendered to society by the agricultural sector (carbon storage, renewable energy sources).

It is hoped that using this tool will enable farmers to identify levers for improving their practices. The tool is currently designed for cattle rearing and arable farms, but is due to be extended to pig and poultry farming.

Share this article
On the same subject
#ACV #Article