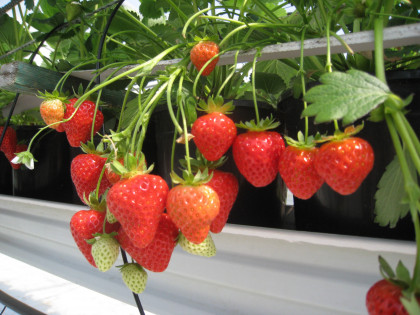 Recent years have seen growers increasingly interested in introducing new strawberry varieties on their farms, either in response to customer demand or, simply, to replace varieties currently grown that no longer meet expectations.

Variety testing has been an ongoing activity at CRA-W for many years. Each year, new June and double-cropping strawberry cultivars are tested in CRA-W’s experimental garden, both in soil and in soilless systems, and also at a grower’s in trials funded by the Regional Government of Wallonia. As a result of these variety trials and tasting sessions arranged for producers, the Italian Joly variety, currently being tested, won over the growers with its good flavour and commercial yield properties, and significant quantities have therefore been ordered for the 2014 season. Perhaps we will see it in the shops next season ...

Similarly, among the small fruit crops two Italian double-cropping raspberry cultivars stood out in the trial for their flavour, commercial yield and disease resistance.

The impact of the new pest, Drosophila suzukii, on strawberry and small fruit crops in coming years remains to be assessed. This little fly, which produces several generations per year, has already caused a lot of crop damage in several countries, so much so that some growers have been forced to give up as it was no longer profitable.

Our programme of work also includes other trials which will be designed in consultation with the Technical Committee of growers and other strawberry industry players.

Project subsidised by SPW under the Pilot Centre for Strawberries and Woody Small Fruits agreement no. 2855/7

Share this article
On the same subject
#Article #Strawberry