CRA-W takes a close look at the organic poultry sector 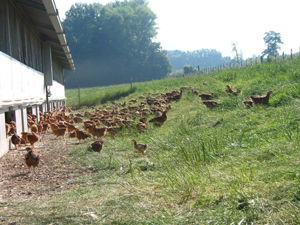 Since 2007 CRA-W has been involved in a technical and economic monitoring of organic chicken farms in collaboration with Wallonia’s poultry and rabbit sector association (FACW). The aim is to optimise performance and promote development of the value chain “Coq des Prés”.

Back in 2001, a company called For Farmers Hendrix (formerly Hendrix) established a broiler production and distribution chain complying with the Organic Farming specifications. To support its development of this sector, some farmers have approached FACW and CRA-W to ask them to conduct a technical and economic study of their activities. The Animal Breeding, Quality Production and Welfare Unit accordingly has developed an Excel spreadsheet for encoding technical and economic data for each batch of chickens (feed consumption, mortality, weight over time, cost of feed, selling prices, etc.) and calculating performance ratings (consumption index, production cost, etc.) in order to create a database for all the batches monitored over the years. The data are regularly analysed and shared during meetings with individual or groups of farmers from the chain. These have led to participatory discussions and opened up constructive debate. Analysis and comparisons of the technical and economic prevailing situations have resulted in some significant progress, achieved by improving farm performance and profitability. Benchmarks have been collected with a view to developments.

The organic sector has originally targeted the Dutch market. The Walloon cooperative, “Coq des prés”, was set up in 2010 in response to the local demand. The price policy followed by these associations on the two markets consists of adapting poultry selling prices to counter fluctuating feed costs.

The monitoring scheme currently in operation encompasses 37 producers in Wallonia.