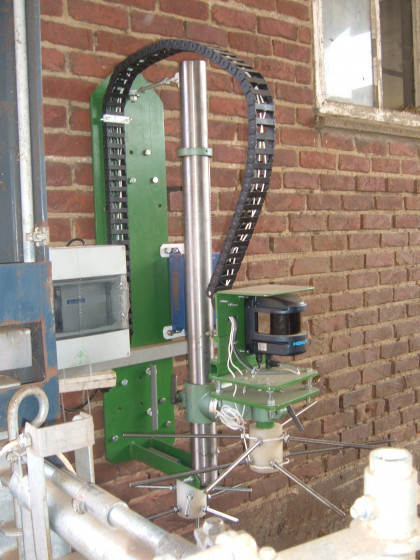 To ensure profitability, a cow has to calve once a year. Each missed cycle impacts directly on the farmer’s income. Detecting heat in order to carry out insemination is therefore vital.

Mounting is a characteristic sign of animals in heat. Mounting generally happens at night. That makes it difficult for the farmer to pinpoint heat in a cow and thus carry out insemination at the right time.

Various equipments are available for automated surveillance on herd. An innovative prototype has been designed by a Walloon farmer to detect mounting installed cattle within a delimited surveillance area. The method involves scanning the area with a distance sensor (infrared laser beam) and recording several distances as a function of a scanning angle. If mounting takes place within the area, the laser beam is broken and the action is detected.

The prototype is undergoing technology coaching by the Innovatech association in Charleroi, which asked CRA-W to validate the functioning and reliability of the device. One particular requirement was to determine whether the equipment detects all instances of mounting and, conversely, whether each movement detected is in fact an instance of mounting.

Before running the experiment, some preliminary measurements were made to establish a number of parameters necessary toadjustthe equipment. Afterward, a herd of nine Holstein heifers divided between two stalls was used to validate the device. Heat was artificially induced in order to trigger intense mounting within a specific, predictable two-day period. A surveillance camera was set up above the stalls for continuous video recording of the animals and subsequent determination of mounting. The equipment was validated by combining both methods.

The preliminary measurements showed that the prototype was very sensitive to weather conditions, specifically sun and mist, both of them causing  many inopportune beam breaks. On the other hand, over the two-day validation the prototype detector picked up 99.4% of the 616 mountings displayed, and 97.6% of the recorded beam breaks were found to correspond to actual instances of mounting. The prototype was therefore established to be reliable over the experimental period. Accordingly technology coaching is ongoing, as a contribution to the development of precision agriculture.