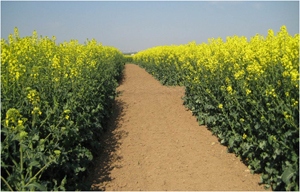 Since the renewal of interest in oilseed rape growing in Wallonia that began in the early nineteen eighties, breeding has been characterised by a series of significant innovations in productivity and seed quality. CRA-W has conducted a number of annual variety trials in Wallonia in cooperation with the SPW Department of Agriculture, Natural Resources and the Environment (DGARNE).

Breeding has resulted on the one hand in ‘single zero’ varieties with no erucic acid, which is suspected of causing cardiovascular disorders, and on the other hand in ‘double zero’ varieties, with no erucic acid and with a low glucosinolate content, that have an antinutritional effect on non-ruminants in particular. At European level, the conversion from 0 rape to 00 rape was very rapid, being complete in Belgium by 1990.

Then came hybrid varieties with higher yields because of the heterosis effect. Producing ‘restored’ hybrid varieties requires, firstly, a male-sterile line and, secondly, a line producing pollen containing genetic material that will restore the fertility of the resulting hybrid. In Belgium, the first ‘restored’ hybrid varieties marketed in 1997 were obtained via the MSL system developed by the German company, NPZ-Lembke. The hybrids resulting from the Ogu-INRA system developed in France appeared a little later, in 2000.

Farmers started enjoying the benefits of hybridism in 1994, thanks to variety associations comprising 80% male-sterile hybrids and 20% pollinating lines. Synergy was the first such model, called a ‘hybrid-line composite’ or HLC, and was relatively widely grown in Belgium. The pollinator percentage was then increased from 20 to 30% to promote fruiting after fertilisation. Synergy was followed by various variety associations, some of them having the same sterile male but different pollinating lines. Nearly all the oilseed rape sown in Belgium today is likely to be hybrid varieties.

A further aim of breeding hybrid varieties was to limit autumn stem elongation, resulting in better winter resistance in mild autumns that favour strong growth before winter sets in. Hybrids also have greater resistance to shattering, allowing all the siliques to reach maturity without the risk of premature seed loss from the first mature siliques.