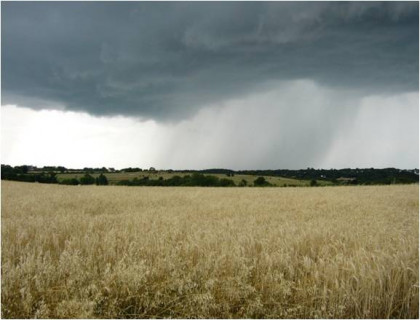 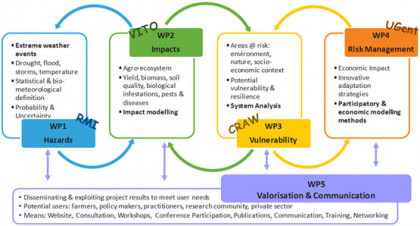 Climate change has become a tangible reality affecting all of the world’s population and ecosystems at different levels. These changes are also accompanied by increased occurrence of extreme weather events, such as drought, hail or torrential rain.

To achieve this aim the project is following four interdependent lines of research.

The first of these involves determining the occurrence of extreme weather events (of a given level of intensity) by calculating their return period.

The present and future impact of such extreme weather events on agroecosystems will then be assessed by a modelling approach. That impact will vary from one agroecosystem to another, according to their vulnerability to a particular extreme weather event. In the context of the MERINOVA project, vulnerability will be considered from both an economic and an environmental and social point of view.

The third line of CRA-W research aims to make vulnerability maps for all the agroecosystems studied and, by combining them with the return period maps previously created, to produce risk maps. These maps will enable the most vulnerable areas/risk areas to be identified for each extreme weather event.

Within the risk areas, surveys will be conducted to ascertain farmers’ perception of climate change and extreme weather events and to identify which adaptation strategies they have implemented or could implement to cope with such extreme weather events. Experiments will be set up involving farmers in the risk areas who operate in different sectors, and innovative adaptation strategies are expected to emerge.

MERINOVA is a four-year project (June 2012-May 2016) within the framework of the seventh call for proposals entitled ‘Natural risks to ecosystems and the socio-cultural heritage of Belgium and/or Central Africa’ (contract no. SD/RI/03A), funded by the Belgian Science Policy Office (BELSPO) and combining the expertise of four scientific teams (IRM/KMI, VITO, CRA-W and UGent).