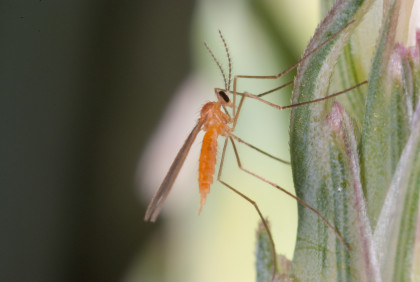 Between mid-April and mid-June the adult orange wheat blossom midges – tiny little midges – emerge in the fields in one or more waves. Having been fertilized, the females fly off in search of ears of wheat to lay their eggs in.

The eggs hatch a few days later and the larvae then feed on the grain. On completion of their development the larvae drop from the wheat and burrow into the soil, where they remain until the following spring. The broad lines of this insect’s biology have been known for a long time, but agronomists were still missing one critical element: the factors that determine the emergence date. The fact is the adults only live for a few days. If they emerge once the wheat has started heading, oviposition can take place, resulting in yield and quality losses; frequently, though, emergence does not coincide with the vulnerable stage of the wheat. In that case the insect fails to reproduce and the crop is unscathed. With no way of predicting emergence it was not possible to assess the risk or to advise farmers. CRA-W researchers therefore spent several years attempting to understand what governs the insect’s development. From 2007 to 2010 the insect was observed as it developed in the soil, and flight patterns were then determined with the aid of pheromone traps. Extensive data were collected in the field and compared with meteorological data from other sources. The development conditions were progressively identified, namely the need for cold to break the diapause, the temperatures needed to stimulate emergence from the cocoon, heavy rain to trigger pupation, etc., until, finally, a predictive model for adult emergence was built. The model was validated by testing under controlled conditions where emergence was prompted. Then, in 2011, 2012 and 2013 it was used to predict the dates of the first insect flights in the field, proving accurate to within a day for three successive years.

One gap in our knowledge has been filled: it is now possible to predict harmful coincidences and include that information in the warnings to cereal growers. The new knowledge acquired also enables young adults ready to lay to be produced at will and their emergence to be programmed. This possibility has led to the development of a simple, effective method for testing wheat varieties’ resistance to the insect.