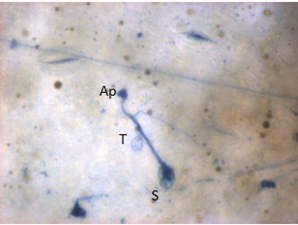 Whereas the initial stages of an infection are determined by the quality of the immune response, successful tissue invasion depends on access to the host’s nutritional resources.

Understanding how the immune system is activated in plants has made a big contribution to improving pathogen resistance in cultivated species.  The various models that have been built are based on the plant’s perception of ‘non-self’. That perception calls forth a set of defence responses (thickening of the cell wall, production of toxic compounds, cell death, etc.) which are generally sufficient to check the infection.
However, the agricultural value and, in particular, the sustainability of this form of resistance can be vastly undermined by the emergence of new genotypes of the pathogen that are able to by-pass, weaken or even suppress the immune response.

However, resistance / susceptibility to pathogens are more than simply a matter of immune response development.  Recent data show that having avoided the pitfalls of immune response, rather than finding itself in a nutritional paradise the pathogen in fact faces a potentially hostile medium which it must adapt to and which it attempts to control.

The proteomic strategy we have adopted in order to characterise potato/late blight interactions has revealed a particular aspect of the interactions between the host and pathogen metabolisms.  In a compatible relationship the pathogen induces the chloroplast to use the light energy to break down the reserves in the cells and thus to feed its growth  (Bertrand Colignon, doctoral thesis). These results open up promising prospects for controlling late blight development.