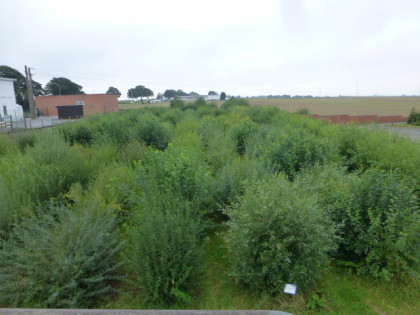 Renaturation of cross-border ripisylvae with woody ecotypes is now possible following the –availability of valuable multiclonal alder and willow collections.

Hundreds of common alder and willow specimens have been collected on the banks of Wallonia’s rivers forming part of the Rhine, Meuse and, to a lesser extent, Escaut basins to form multiclonal collections. In the case of the black alder, the campaign extended to French Lorraine and the Grand-Duchy of Luxembourg through Interreg Greater Region projects (Ecoliri and Ecolirimed successively) financed by the ERDF and the regions concerned.

The origin of the clones is certified and alders traceability can be ensured with molecular markers tools. Although their genetic quality has not been investigated, the phenotypical value (habit, vigour) of the clones is known. On the basis of in situ studies and tests, some alders clones have been identified for their better tolerance to their decline caused by Phytophthora alni, whereas other alders and willows assessed specifically for their tolerance to metal trace elements have been noted. Several black alders obtained from seeds collected from sites infected by P. alni or produced in vitro by somaclonal variation for phytoremediation have been included in the collections.

As a result of this multidisciplinary work, a young plant supply process has been established. These woody ecotypes are planted together into nuclear stock orchards that give cuttings for the renaturation programmesof river and stream bank and to cover poorly drained areas , wetlands or occasionnal flooding areas as well. They are also suitable for planting in areas with ecologicalal constraints or for restoring shrubby landscapes on lands marginalised by industrial activities or given over to biomass production as a potential source of renewable energy.

The young plants originate from optimised production conditions and are distributed in accordance with the rules applied to forest multiclonal varieties. Information is provided on general behaviour or specific behaviour with respect to disease caused by Phytophthora alni in the alder, adaptation to hydrosystems in the willow and behaviour with respect to accidental heavy metal pollution.

It is therefore anticipated that the plant material will adapt naturally to the foreseeable biological risks. While remaining subject to development and preserving existing diversity, it ensures the sustainability of the bioengineering methods applied. It contributes to improving the quality of surface water and groundwater and improving soil quality and ecosystem balance according to the nature of the sites to be revegetated.

The strategies developed in the course of these Interreg projects could be applied to greening other sites requiring woody species. If extended to the other European Union countries they should enable the collections to be linked up.