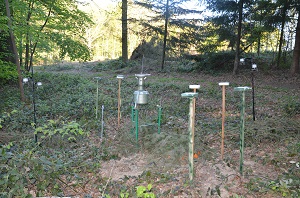 Many of the diseases affecting our forest species are caused by fungi that spread via wind-borne spores, sometimes over long distances.

Some spores, such as those associated with rust, can travel thousands of kilometres and still remain viable. Others originate from wooden packing or young plants from infected nurseries from distant parts of the world. If the environment is favourable (in terms of weather conditions and host plants in situ), these “exotic diseases” can become established and possibly spread from the original seats of infection, causing considerable damage to susceptible woody species. This probably accounts for the introduction of Chalara fraxinea, the causal fungus of ash dieback in Europe, and Cryphonectria parasitica, the agent of chestnut blight; both these fungi come from Asia.

The proposed response to these threats to plant health involves using early detection tools and in particular, spore sensors. However, sensors used in environments like forests, parks, ports or nurseries must fulfil various criteria. They must be (1) inexpensive (to enable large-scale use and to keep down the replacement cost in the event of vandalism), (2) easy to transport and install and (3) robust (operational at all times). The CRA-W Mycology Laboratory is developing such sensors in the context of the European RESIPATH project (http://www.slu.se/resipath).

Comparative tests involving other capture systems were conducted in Wallonia in 2014, looking at three diseases occurring in our forests (ash dieback, oak powdery mildew and Fomes root rot in conifers). These tests showed that the sensors developed by CRA-W met the above three criteria and were able to detect the lowest spore concentrations compared with passive sensors (paper filters) or impact sensors (Burkard sampler). In the next stage of the research the sensor will be combined with new techniques for detecting a large number of fungi at once. This should give plant protection authorities a useful tool for rapid response in controlling emerging diseases. It should also lead to a better understanding of the epidemiology of fungal diseases affecting our forest ecosystems in a context of climate change.