Utilising green gold and brown gold on our farms 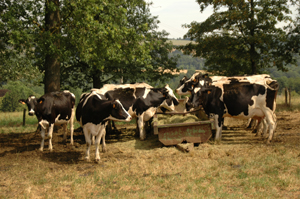 Following a question from a nature parc on how it can support its farming in the face of rising input prices, the level of utilisation of home-grown fodder resources and farmyard manure was assessed by CRA-W in cooperation with the Fourrages-Mieux association and the Haute Sûre Forêt d’Anlier nature parc, with backing from the Leader+ programme.

The fodder produced (grass and maize silage, hay, fodder cereals) was characterised in terms of quantity and quality. A simulation was then performed to optimise the utilisation of this fodder to meet the herds’ needs. The stocks of supplements necessary were then determined and compared with the supplements actually fed. The results show that home-grown resources are used effectively on more than 75% of the farms, and that high stocking densities are a limiting factor.

With regard to good utilisation of farmyard manure (dung, compost and slurry) we started from a comparison of the expected fertilisation levels based on the recorded fodder production figures and fertilisation levels actually practised. Fodder production levels were determined on the basis of the recorded stocks and the grazing animals’ needs. The pastures' nitrogen requirements were then established based on production of 5 t of DM per hectare without nitrogen fertilisation. The difference between the production levels observed and this basic production arose from the nitrogen input either from organic fertilizers (80% efficiency of the N content, if applied annually) or mineral fertilizers. Production of 25 kg DM per kg of N applied was expected. This approach reveals a good correlation between the recommended and actual fertilizer applications, though some of the most extensive farms could limit their fertilizer application to prevent the stock produced from exceeding the animals’ requirements. Nevertheless, this procedure enables them to manage the risk posed by leaner years due to the vagaries of the weather.

The results of the work were presented to the farmers involved as a group and an individual report was also provided for each farm to help them identify possible margins of progress.