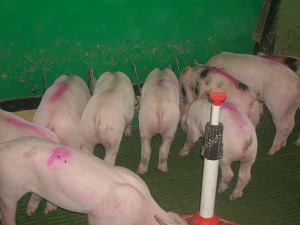 Apart from lysine (Lys), methionine, tryptophan and threonine, the use of which is common and well documented, valine (Val) is proving to be restrictive in piglets receiving low-protein diet. However, the data in the literature are still scant and need to be corroborated.

To that end, trials have been carried out at the CRA-W’s experimental piggery, in cooperation with ORFFA Belgium, to validate growth-limiting lysine and valine levels in weaned piglets fed low-protein diets. The first step was to verify that a level of 0.95% standardised ileal digestible (SID) lysine and a Val/SID Lys ratio of 60% were limiting in post-weaning piglets (Phase 1). Then, a valine dose-response test on post-weaning piglets was carried out to establish the Val/SID Lys ratio that optimizes expression of the growth potential (Phase 2).

The Phase 1 tests showed that a low-protein diet deficient in lysine and valine restricted animal performance. Performance was improved when the diet was supplemented with those amino acids. A level of 0.95% SID lysine in the feed in combination with a Val/SID Lys ratio of 60% was therefore found to limit the performance of piglets on a low-protein diet. The Phase 2 valine dose-response test established the optimum Val/SID Lys ratio for expression of the animals’ growth potential in these conditions. By applying a curvilinear-plateau statistical model to the performance data (weight gain and consumption index) the Val/SID Lys ratio was established as 69.2%, which is close to that quoted in the literature (70%).

The study has validated the valine level needed to optimise growth in piglets fed a low-protein diet.