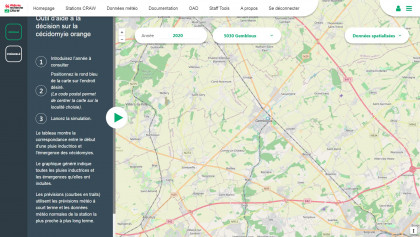 For a sustainable agriculture …

European union directive 2009/128/CE imposes member-states to set up tools that allow for a more rational use of pesticides. Among these tools, agricultural decision support systems, based on crop monitoring models for the control of pests and diseases are widely adopted and have proved their efficiency. However, due to the difficulty to get meteorological data at high spatial resolution (at the parcel scale), they still are underused.

… thanks to precision meteorology.

The use of geo-statistical algorithms (Kriging, Multiple Regressions, etc.) makes possible to interpolate data provided by physical weather stations in such a way that a high spatial resolution network (mesh size of 1 km⊃2;) of virtual weather stations could be generated.

The project aims to set up an operational web-based platform designed for real-time agro-meteorological data dissemination at high spatial (1km⊃2;) and temporal (hourly and daily) resolution. Following parameters will be available :

To achieve the availability of data at such a high spatial resolution, we plan to “spatialize” the real-time data sent by more than 30 connected physical weather stations belonging to the PAMESEB and RMI networks. This spatialization will then result in a gridded dataset corresponding to a network of 16 000 virtual stations uniformly spread on the whole territory of Wallonia.

… to control pests and crop diseases.

These “spatialized” data will be made available through a web-platform providing interactive visualization widgets (maps, charts, tables and various indicators) and an API (for Application Programming Interface: a software that allows two applications to talk to each other) allowing their use on the fly, notably by agricultural decision support systems providers. An extensive and precise documentation about data origin, geo-statistic algorithms used and uncertainty will also be available.

The following figure shows a first draft of the functional architecture of the platform: