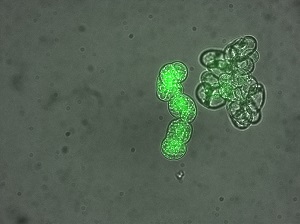 Hydrogen peroxide is known in phytopathology as a harbinger of the infection signal in infected plant cells.  The cells alter their metabolism to fight the infection and ward off the disease.  To investigate the spatiotemporal development of the early stages of the infection and devise strategies for optimising means of control, a fluorescent sensor that detects hydrogen peroxide was synthesized in cooperation with the University of Louvain.  The CRA-W teams tested, validated and applied this innovative sensor to fluorescence microscopy.  This research opens up new routes to understanding the mechanisms of fungal, parasitic or microbial infections in our crops and agricultural ecosystems.

On the back of this, other work carried on at CRA-W also aims to use fluorescence in response to a scientific challenge. In the context of feed quality control, animal proteins are detected by microscopic observation of particles such as bone, cartilage and muscles and PCR analysis to detect the DNA of species or groups of species, like ruminants. Although complementary, these two methods cannot answer all the questions, especially when it matters which tissue or cell is the source of the DNA detected. Hence the idea of “getting bones to talk” by using the fluorescence in situ hybridization method – FISH for short. This involves linking (or hybridization) of a fluorescent DNA sensor with its complementary DNA sequence (the target). The pair is then observed by fluorescence microscopy. This method enables DNA to be detected in tissue or cells and accurately located.  Based on that, a promising method has been developed within the framework of EURL-AP for detecting animal protein in animal feed.  The FISH method can also be applied to a great many microstructures of animal, fungal or plant origin occurring in agricultural produce, feed and food. This is a complementary new analytical tool for quality control, authentication and detecting contaminants of different origins.

CRA-W has thus gained new scientific expertise underpinned by advances in its equipment, namely the acquisition of LED technology and a new, fully automatic inverted microscopy platform. Fluorescence microscopy is thus demonstrating its potential for innovative research.  It will undoubtedly be a major asset to CRA-W in future and to the services the Centre provides on the basis of its work.   We see a bright future ahead!