Towards a 100% robust organic potato crop 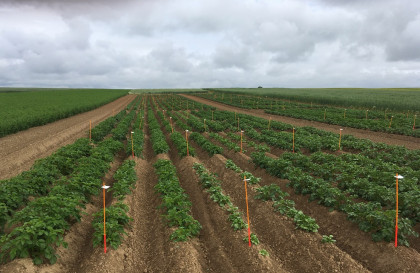 What varieties of potatoes should be used to reduce and eventually eliminate the use of copper as a protective agent against late blight?

To answer this question a three-year varietal trial was set up within the CRA-W, in collaboration with the Fiwap and Biowallonie.

Despite the implementation of effective warning systems for the control of late blight (Phytophthora infestans), management of late blight remains a major problem in both organic and conventional potato cultivation. The specifications for organic farming only allows the use of copper products to fight this disease. However, the organic potato sector wishes to free itself from its use. Like their Dutch counterparts in 2017 and Flemish in July 2018, the Walloon stakeholders in the sector signed an agreement in November 2018 aimed at only using robust varieties by 2021.

The CRA-W is a signatory to the convention as a research and extension partner. Thanks to the close collaboration between four research units of the CRA-W, a three-year trial was set up and integrated into the BIO2020 programme (thanks to the CRA-W’s own funds and the support of the potato pilot centre). Since 2019, the trial has included 20 varieties selected on the basis of their resistance to late blight, according to the results of the MilVar trials carried out by the CRA-W and the CARAH.

Resistance to late blight is the main criterion for defining a robust variety, but it is not the only one. Indeed, in the current context of climate change, the concept of robustness is more global. It concerns other diseases and pests, the ability of the crop to be less or little sensitive to water stress and high temperatures, or to be more efficient in making use of nutrients such as nitrogen. This is, if possible, by combining it with the earliness of the crop to quickly achieve tubers sufficient in weight and quality before the development of late blight. This last aspect is particularly important in organic farming. The concept of robust varieties therefore aims to guarantee organic producers a correct yield with an acceptable quality.

The publications (Fiwap-Info, Itinéraires bio, etc.) and the annual online publication of a test report provide communication of the characteristics of each variety tested. The criteria of robustness are emphasised, but also the quality (taste and culinary) and yields, which are essential information for farmers, traders, preparers and processors as part of their varietal choices.

Share this article
On the same subject
#Organic farming #Potato