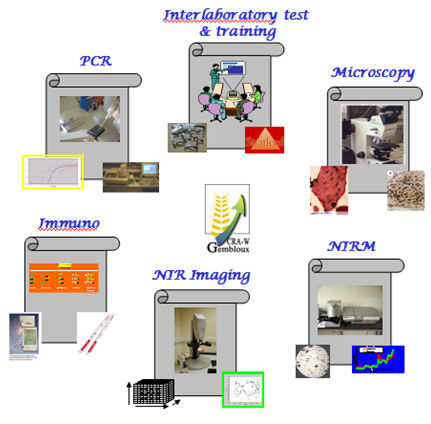 The European Union Reference Laboratory was created in order to ensure a high level of quality, a uniformity of the results and to assist in the development and the validation of new analytical tools and methods to support the detection of animal proteins in feedingstuffs.

The EURL-AP will develop the following priority axes to fulfil its mission:

Up to now, the CRA-W has already undertaken and realised the following initiatives:

·         Creation of the NRL network (with a centralised repository of reference scientists).

·         Creation of a secure EURL-AP Intranet for diffusion and sharing of information amongst the 26 NRLs.

·         Creation of a feed microscopy course on the detection of animal proteins.

·         Organisation of training sessions for the NRLs (theoretical and practical courses for the identification of animal particles in feed).

·         The development of a sample database management software (SMS for Sample Management System) for a collection of up to 2600 animal feed or ingredient.

·         Creation of an online micrographs collection for the NRL network (around 600 pictures).

·         Organisation of collaborative trials (2 interlaboratory studies for method validation and 2 proficiency test for the NRL network).

·         Development of new markers for the classical microscopic method for the detection of animal proteins in feed.

·         Development of a robust quantification method requested for future partial lift of the total feed ban.

·         Development of a real time PCR method for the detection of animal proteins in feed.

·         Participation in other European research projects (Safeed-Pap, Feed for Health).

·         Participation in international congresses and meetings in the field of feed safety.

·         Visits and audits of NRLs on behalf of the European Commission.

The CRA-W, as EURL, has in charge the coordination and management of the NRL network.  Thus all proficiency testing, workshops, trainings, scientific advice to the NRLs are centralized in Gembloux.

The EURL-AP coordinated by the CRA-W includes a network of 26 NRLs elected by the European Commission among the Member States.